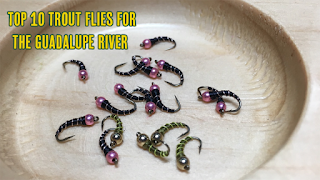 Well, everyone, it seems to be that time again. The days are getting shorter, the nights are getting colder, and the tube hatch has found itself dormant once again. It’s the time of year when the rest of us begin preparations to stand elbow to elbow on our favorite southern trout fishing stream, the dram... I mean the Guadalupe river. Landon and I (Zach) recently sat down on the Honey Hole Hangout Podcast and discussed our favorite tactics and flies for our great river. So whether you’re looking to take on the river for the first time this year, or looking for some inspiration, look no further than this list.

Buckle up folks this is just about the only time we actually had the same fly on the same number. Parachute Adams is a classic. There is something special about holding one in your hand as a trout bum. It can be effective in very small doses on the guad (which is why it sits on our number 10 spot) but the real reason is... are you even a fly fisher if you don’t have one in your box?

Now I’m not going to lie. After checking out Landon’s small green thing, affectionately called the Shaggy wire Caddis, I am feeling a little fly envy. The SWC is a fantastic fly that looks like everything that is buggy, and it comes loaded with some great action with the way the fibers move in any direction. Kind of makes me wish I wouldn’t have picked such a boring fly like the Copper John. This leads me to the copper john. It’s a copper john. It is made of copper wire and probably has been held by several people named John.

If you were hoping for a little more flair early on in our list, then you have made it to the right section. The purple haze, outside of having a fantastic name, is a great-looking nymph. Drop this guy behind just about anything and you’ll be hearing those trout scream all along the watchtower. Now, on to my beautiful Fox Squirrel Nymph. It is everything you would want in a chunky nymph. Buggy, thiccc, and just the right size for the newly relocated rainbows on the guad. Get one with a bright red collar, and show those trout that you know what makes them squirrely.

Fox Squirrel Nymph, I love this fly Landon loves this fly, you should love this fly too. Rainbow midge - I love this fly. I will tie it up with tons of different collars, maybe I want to add a little hackle to give it some chunkiness and movement in the water? Maybe I’ll get really crazy and tie a little rubber leg off the back. Why? Because I can! Anyways, throw this guy as a dropper on a sunny day, and make those trout taste the rainbow.

I was counting down to get to the slump buster. Now I am a huge baseball fan, so the idea that there is a fly to get you out of the midseason slump is the best type of fly. I usually throw this guy during the warmer months for some Guadalupe bass, but Landon has been trout fishing longer than me so I’d trust him on this one. Strip these guys in any of the deeper pools and maybe you’ll pull out the creature of the Guadalupe.

Zebra Midges are what they are… tiny, little midge patterns that get their name from their zebra-like stripes. They normally are black and silver (zebra) but you’ll see them more and more in bright color patterns, such as red, purple, and cream. If the fish are feeling a little picky, tie one of these guys on. Smaller sizes are preferred.

This is a real curveball, one of these flies I rarely hear about, and the other one is in just about every box out there. The Quasimodo is just like a pheasant tail - See Later - but it is tied on a curved hook rather than a dry fly hook. It looks great, definitely catches fish, and you’re not as basic as just throwing a pheasant tail.
Then there is my fly. The wooly bugger. Tried and true. Has a lot of positives. Great action, it comes in a variety of sizes, shapes, and weights. Plus you can modify them in about a million ways. Add rubber legs, some flash, maybe a conehead and you’ve got a brand spanking new fly. Only thing? Nymph rigs are typically a little more effective on the guad, but don’t let that stop you from wearing out your stripping finger.

This one will surely make some people mad, but mainly validate a whole bunch of us. Mop flies work, they are squishy, moppy, pellet-looking fools who catch fish. Especially stockers. They are a piece of a mop, with some weight, and a little bit of hackle for some action. They work. Everyone will say they hate them, but who keeps buying them then?

Pheasant tail - Basic version of the Quasimodo. See Quasimodo's description above, then imagine it more basic. Drop it behind anything, get it close to the bottom and you’re gonna have a good time.

The top 3, these flies are the go tos. These are the ones we will start with just about any day, and switch it up only if these aren’t working...or we get bored catching too many fish. The Pat’s Rubber Legs is a famous imitation of a stonefly. They just look like something a fish would want to eat. Legs for days, chunky and come in a wide array of colors. I’ll typically have this guy right off the indicator and drop something smaller, like my number one, off the bend of the pats.

The egg will probably get as much hate as the mop fly, but at least it is imitating what fish actually eat. They are either rubber or yarn egg-shaped flies. They come in all shapes and sizes. The egg clusters and ones covered in fake fish milt are my favorites. Add some weight and get these guys close to the bottom.

What can we say about these flies that hasn’t already been said before? Nothing. Go read the previous entry at number 6 and number 3. These are great flies and pair them together for two times the number two.

Ahhh, a breath of fresh air. Both of us had number ones that weren’t on the other's list. Landon went with his go-to fly the squirmy wormy. It is such a simple, yet sophisticated fly. A piece of rubber tied to a hook. Can have weight, can come in any color. This fly will instantly bring you back to sitting on the creekside, or the pond tossing in earthworms and catching anything and everything. It is no different on the Guad. The trout love them and will go for them. I’ve seen people go tight on the bottom of the river, middle of the column, and right near the top. So the only trick is to make sure you have a wet wormy and you’ll catch fish… probably.
Then finally for me, the Frenchie. I fell in love with this fly while Instagram stalking. I fell in love with the way the fly is tied on a jig hook, has a slotted bead (so it rides hook up for fewer snags), and comes in all the colors of the rainbow. It is a perfect fly. I’ll typically use this fly just about wherever I go. I tie up some in purple, red, and a black-blue. However, traditionally it is a green body, with a pink collar. It has a larger head, so it has no problem getting down in fast currents. You won’t see this one on too many anglers lines, which in my mind makes me even more confident in this guy. Drop it off of a big chunky fly, or put it on the top of your rig followed by a smaller natural pattern. It is completely versatile, and in my experience, deadly on the Guadalupe.

No matter what you do this season, enjoy it! Test out anything and everything you can. These are what works for us, but there are a million anglers with a million opinions. The main thing is to treat everyone with respect and have a great time doing it. 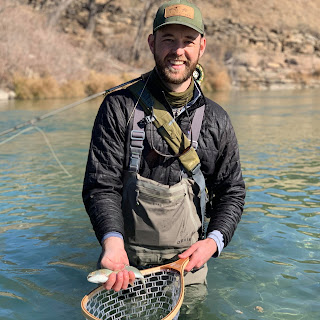 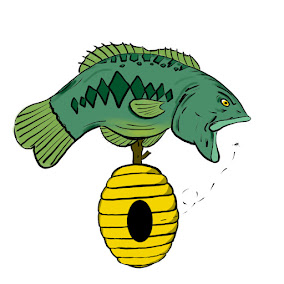